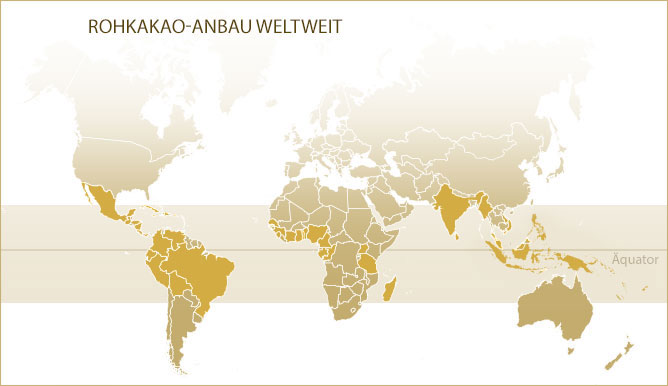 Due to its specific requirements, cocoa only grows in a narrow belt along the equator, about 20 degrees south and 20 degrees north. The cultivation countries are mainly located in West and Central Africa, Central and South America and Asia/Oceania. From there, cocoa reached Europe and the so-called New World via the trade routes of the time. In the countries where cocoa is grown, cocoa is still only processed in small quantities and hardly consumed.

The situation is completely different in the import and consumer countries. Europe, along with Belgium, Germany, the Netherlands, the United Kingdom and North America, are among the leaders here. In addition, demand is growing in North Asia and increasingly also in East Asia.

For further information on the producing countries and on Germany as a country of import and consumption please follow the links.

Source: Association of companies involved in the raw cocoa trade, based on data from the International Cocoa Organization

This Web site uses cookies to enable core functionality and to personalize content and to analyze visits to the Web site. Some of these cookies are essential, while others help us improve your experience by providing insight into how you use the Site. For more information about the cookies we use, please refer to our Privacy Policy.

This cookie is used to throttle request rate. These are third party cookies that are placed on your device to allow us to use the Google Analytics service. These cookies are used to collect information about how visitors use our website.

Is used by YouTube to remember user input and associate a user's actions. This cookie lasts for as long as the user keeps their browser open.

This Web site uses cookies to enable core functionality and to personalize content and to analyze visits to the Web site. You can find more information in our.