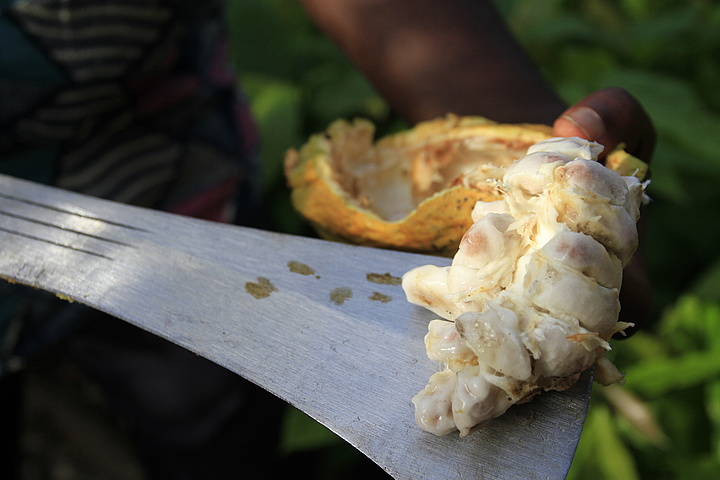 Challenges in the Cocoa Sector

Around 90 to 95 percent of cocoa is grown by small farmers. Their average area under cultivation is two to five hectares. Especially in West Africa, the main cocoa growing region, the working and living conditions of cocoa farmers and their families are difficult.

The income of most cocoa farming families is below the internationally defined poverty line. Poverty is therefore a major challenge in the cocoa sector. Other challenges include abusive child labour, which is a consequence of poverty, the loss of forest land due to cocoa cultivation, and the observance of human rights along the supply chain. You can read more about the challenges and possible solutions in the sections below. 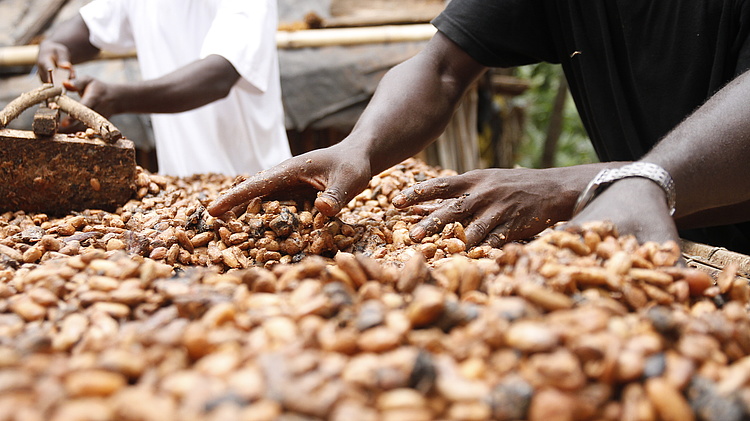 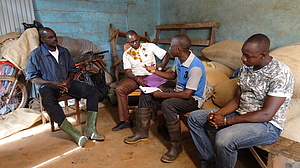 The income of cocoa farmers in Côte d'Ivoire and Ghana averages EUR 0.97 per person and day (among others: study by KIT Institute, 2019). Most cocoa farmers in West Africa therefore have an income far below the poverty line defined by the World Bank (USD 1.90, converted EUR 1.57 per person/day).

Cocoa is traded on the international stock exchanges. This low income is caused, among other things, by fluctuations in the world market price. Another cause is state intervention. This is the case in Côte d'Ivoire and Ghana, where government agencies regulate marketing. The price to be paid to the producers (farm-gate-price) is additionally burdened by the state levy there. Added to this is the dependence of farmers on buyers and transporters, especially if they live in remote areas. Other reasons for poverty are the strong dependence on cocoa as the main source of income and, in many cases, the fact that the areas of land are too small to allow economic cultivation.

The addition of other crops, efficient management and good care of the land would contribute to improvement. Support is also provided by cooperatives. Professionally set up, they undertake the joint marketing of cocoa for their members. Cooperatives have greater negotiating power and can support their members with additional services.

The low income of cocoa farmers is directly related to the low productivity of the farmland and the low farm-gate-prices. This leads to economic insecurity and impoverishment of cocoa farmers. The most important prerequisite for loans to make necessary investments is thus also eliminated. If there is no money to pay for labour, the children have to work, often under conditions that are not age-appropriate and with consequences for physical development.

More on child labour can be found below and in our background paper. 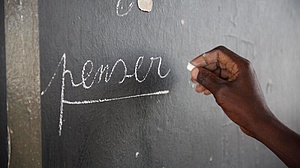 Abusive is any form of child labour that harms the child physically or physically and prevents him or her from attending school. Abusive child labour exists in many sectors worldwide and is also one of the biggest challenges in cocoa farming. In Côte d'Ivoire and Ghana alone, the main cocoa-growing countries, over 2 million children work in dangerous conditions on cocoa fields, despite the fact that child labour is officially prohibited in both countries.

The main reason for this is the poverty of cocoa farming families. Too low and erratic incomes mean that farmers no longer invest in cultivation and have no financial means to employ workers. One consequence is that children have to work in the fields under conditions that are not age-appropriate. In addition, cocoa-growing regions are mostly remote and poorly or not at all developed. Schools are not available everywhere or are not attended by the children despite compulsory education, because the cocoa farming families lack money for learning materials or they need the children as workers on their fields.

For the children, the work in the cocoa fields not only has possible effects on their health and physical integrity, it also means that less or no time can be spent on school attendance.

You can find out more about child labour in our background paper. 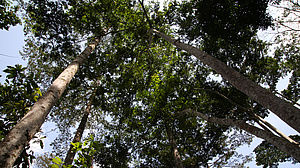 In Ghana and Côte d'Ivoire, large areas of natural forest have been destroyed or even cleared in recent decades. Côte d'Ivoire is one of the countries with the highest deforestation rate in the world: between 1960 and 2015 the forest cover in Côte d'Ivoire was reduced by 79 percent. Forests and trees are of paramount importance for the climate and biodiversity as well as for cocoa cultivation. Forest soil is rich in nutrients and therefore very well suited as fertile soil for cocoa cultivation. Agroforestry, the combination of tree population and agricultural use, takes advantage of this. The decimation of natural forest stands is increasingly prompting cocoa farmers to use the forests actually protected by the government for cocoa cultivation in order to continue to earn an income. Unregulated ownership structures and land rights also play a role here.

In order to prevent further forest destruction, especially in Côte d'Ivoire and Ghana, the Cocoa & Forests Initiative was launched in 2017. The two leading cocoa-growing countries, Côte d'Ivoire and Ghana, as well as Colombia, have joined the initiative, as have numerous cocoa and chocolate processing companies, including members of the German Initiative on Sustainable Cocoa. The initiative aims to support the conservation and restoration of forest areas based on concrete action plans from its members.

For more information on deforestation, see our background paper.

More about the Cocoa & Forests Initiative can be found here.

The German Federal Government’s Guidelines on the Promotion of Deforestation-Free Supply Chains of Agricultural Commodities you can find here. 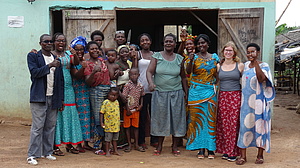 In 2011, the United Nations Human Rights Council adopted guiding principles on human rights, the UN Guiding Principles on Business and Human Rights (UNGPs). They call on all states to take appropriate measures such as laws and guidelines to prevent human rights violations, investigate, punish and remedy them. In addition to the duty of the state, this also includes the responsibility of companies. Internationally operating companies in particular should respect human rights in their supply chains and, to this end, recognise the principles of human rights due diligence (HRDD). This includes, among other things, the obligation to provide regular reporting, proof of effectiveness, and more.

In 2016, the Federal Government adopted the National Action Plan for the Implementation of the UN Guidelines on Business and Human Rights, which sets out duties and responsibilities for the state and business.

Even though the principles mentioned above have been incorporated into national action plans and other guidelines (OECD standards, Global Compact guidelines), laws that make compliance with human rights an obligation at global level do not yet exist at either national or EU level.

Various civil society organisations have therefore been calling for some time for state regulation, such as a legal framework in the form of an EU regulation. Such a regulation could impose a duty of care on cocoa importers with regard to compliance with the laws of the producing country and international human rights, and oblige them to protect the environment. States would then be bound to obtain evidence of companies' compliance with international human rights and national laws.

Through the two ministries that are also involved in the German Initiative on Sustainable Cocoa, the Federal Ministry for Economic Cooperation and Development (BMZ) and the Federal Ministry of Food and Agriculture (BMEL), the German government has joined Belgium and France in calling for binding regulations at EU level to combat child labour and deforestation in the cocoa sector.

The increase in plant diseases and in soil degradation are also related to the climate change. This, too, has an impact on yields and prompts many farmers to grab land for cocoa cultivation. Forest stands that are actually protected are thus increasingly at risk of being cut down. Yields can be improved by productivity-enhancing measures such as fertilization, plant protection and better care of the cocoa trees. The cultivation of cocoa in agroforestry systems, together with other additional shade-giving trees and other crops, also contributes to forest conservation and delivers good yields.

Sustainable cocoa farming begins by reaching as many smallholders as possible, giving them access to training in agricultural practices and improved plant material. To date, there is no legal basis either at national level in Germany or at EU level that makes the observance of human rights or the protection of natural resources an obligation at global level. In December 2018 a roadmap was published at EU level. The paper deals with measures to combat global deforestation and to establish sustainable supply chains. It is currently in the consultation phase.

This Web site uses cookies to enable core functionality and to personalize content and to analyze visits to the Web site. Some of these cookies are essential, while others help us improve your experience by providing insight into how you use the Site. For more information about the cookies we use, please refer to our Privacy Policy.

This cookie is used to throttle request rate. These are third party cookies that are placed on your device to allow us to use the Google Analytics service. These cookies are used to collect information about how visitors use our website.

Is used by YouTube to remember user input and associate a user's actions. This cookie lasts for as long as the user keeps their browser open.

This Web site uses cookies to enable core functionality and to personalize content and to analyze visits to the Web site. You can find more information in our.